Ahvaz
See and Do

Ahvaz White Bridge is not just a bridge, it is a monument, a symbol, a nostology, as well as a tragedy! And moreover, in the eyes of Ahvazians, it is the starting point, where you fall in love, meet with friends, feel your loneliness, feel the true atmosphere of Ahvaz. It is also the second bridge of Ahvaz, the city of bridges, the first modern bridge in the history of the Middle East, and the first fully metal suspension bridge of Iran, literally a symbol of the modernization of Iran during the early reign of Reza Shah Pahlavi.

History of the Ahvaz White Bridge

Ahvaz White Bridge (also called the curved bridge), was built immediately after Ahvaz’s first metal bridge (known as the Black Bridge or Victory Bridge) in 1929. The new part of Ahvaz was developing, and people until then did not have a direct way to the other side of the Karun River. Therefore, the idea of building such a fantastic bridge was requested to the Ministry of Roads and Routes (in those days it was called so) from the Swiss company Sentap, which no longer exists today. The director of Sentap was sent an authorized representative to take charge of the project, such as locating the bridge and negotiating the contract, and a German couple, who were civil engineers, took charge of the bridge project.

That’s where the sad story happened! The story is always fascinating and touching. The chief engineer, the husband in our story dies after the realization of the first big curve, and the wife, who was also an engineer, despite her great grief, continues the work and finally, White Bridge was completed on September 21, 1936, and the grand opening took place on November 6, 1936. Unfortunately, a second tragedy ensues as World War II begins and the bridge was used by the Allies to aid the USSR, which caused the bridge to wear out a little later than it was born!!

The white bridge is nearly half a kilometer long and 9.8 meters wide with two walkways on either side of the bridge and a main road in the middle. The road was only meant to be used by one car at a time, but since its inception, it has been used as a two-way road! Currently, it is only used in one direction due to the fact that the actual age of the bridge is over. In the past, there were also two classic police kiosks at the beginning and end of the bridge, which were dismantled after the revolution in 1979.

This bridge is still functional today, although its useful age was 50 years, as guaranteed by the construction company. It is engraved in the hearts of Ahvazis. White Bridge is also a very romantic and beautiful place to meet a loved one or spend the night when the bridge lights are on. 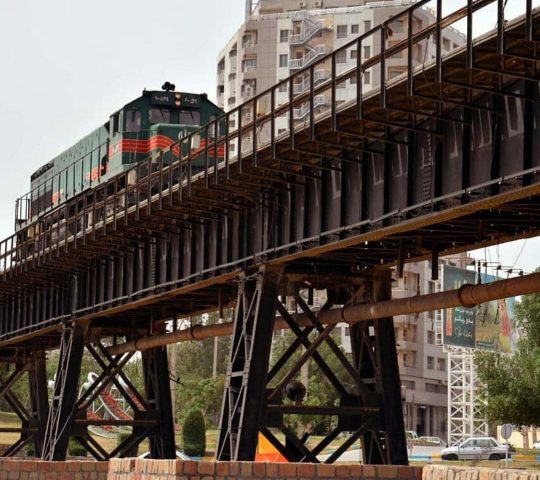