Vank Cathedral, or “The Holy Savior Cathedral” is a cathedral located in Isfahan. Vank means monastery in Armenian. It is located in the Armenian quarter of Isfahan called New Julfa. The gilded ceiling, the inside of the dome, and the beautiful historical paintings are unparalleled. The walls of the monastery are completely decorated with oil paintings.

History of the Vank Cathedral

After the war between Safavid Persia and the Ottoman Empire in the period 1603-1605 the Armenians began to arrive in Iran in search of a new life during the rule of the Safavid king Shah Abbas I.

Beginning in 1604, during the war with the Ottomans, Shah Abbas pursued a “scorched earth” policy in the Armenian region to protect his northwestern borders, which involved the relocation of some 300,000 Armenians to Iran. Many of them were relocated to an area called New Julfa in Isfahan. According to some historians, of the 56,000 Christians forced to leave Armenia, 30,000 arrived in Isfahan. The survivors enjoyed great religious freedom in New Julfa. After entering Iran, the Armenian refugees began to build churches and monasteries to continue their religious activities as in their homeland. And so in 1606, the first monastery was founded in New Julfa, which included a small church called “Amna Perkich,” which means “All Healers.”

Later, the small church was enlarged and turned into the magnificent Vanka Cathedral, which was built about 50 years later under the leadership of Archbishop David. One of the most beautiful churches and one of the greatest attractions in Iran was built in 1664. It includes a bell tower built in 1702, a printing press founded by Cardinal Khachatur, a bookshop opened in 1884, and a museum opened in 1905.

The architecture of the Vank Cathedral

The cathedral’s architecture is unique in the world, as it is a mixture of 17th-century Safavid art and the high arched style of Christian churches. The building has a dome similar to that of Islamic buildings and is believed by scholars to have influenced and inspired the construction of many other Christian churches in Iran and Mesopotamia. The main entrance to Vank’s Cathedral is a wide wooden door that allows visitors to enter the courtyard of the cathedral.

The entrance reveals two corner rooms that were used as administrative offices. The large bell tower dominates the courtyard and overlooks the graves of Orthodox and Protestants buried along the wall preceding the entrance to the bell tower.

The interior is lined with exquisite frescoes and gilded carvings and includes a plinth of ornate tiles. The central dome, elaborately painted in blue and gold, depicts the biblical story of the creation of the world and man’s expulsion from paradise. The bannisters throughout the church are painted with the distinctly Armenian motif of the head of a cherub surrounded by folded wings. The ceiling above the entrance is painted with delicate floral motifs in the style of Persian miniatures. Two sections, or strips, of wall paintings, run along the inner walls: the upper section depicts events from the life of Jesus, and the lower section depicts the torture to which Armenian martyrs in the Ottoman Empire were subjected.

At the end of the courtyard and in front of the cathedral is the building that houses the library and museums of Vank. The library contains over 700 rare ancient manuscripts in Armenian and European languages, dating back to the Middle Ages. The Vank Museum houses a unique and invaluable collection of items belonging to the Armenian civilization. Built-in 1871, the museum contains numerous exhibits related to the history of the cathedral and the Armenian community of Isfahan, including the decree of Shah Abbas I of 1606 on the founding of New Julfa, which prohibits interference by anyone in the affairs of the Armenian community.

The museum’s collection also includes copies of the Bible. A Bible of only 7 grams, made in ancient times by Armenian miniaturists, according to scholars, is the smallest Bible in the world. In the library you can admire Sefevid-era costumes, carpets, European paintings acquired by Armenian merchants on their travels, tapestries, embroidery and other items of Iranian-Armenian artistic heritage. The Vank Museum also has a large collection of photographs, maps, and Turkish documents related to the massacre perpetrated by the Ottomans in 1915. Sacred garments, chalices, and other sacred objects are on display in the museum. Vank’s printing press was the first in all of Iran. 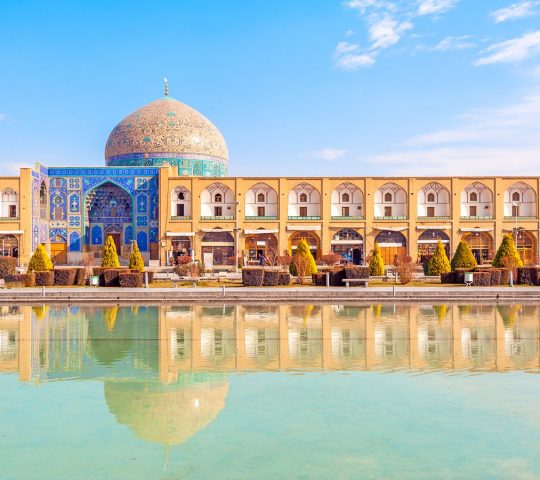