Eram Garden is a historic Persian garden in the city of Shiraz in southern Iran. Eram is the Persian version of the Arabic word Iram, which means “paradise” in the Quran; the garden was so named for its beauty and aesthetic appeal that make it “look like paradise”. The Eram Garden is one of the most famous gardens in Iran for its beauty, size, and age. It is located on the north bank of the Khoshk River in Fars Province and covers an area of about 110,000 square meters.

Eram Garden and its history

Various sources and works indicate that the origins of the garden date back to the 11th century during the Seljuk dynasty, when the ruler of Pars, Atabak Karacheh, ordered the construction of several fences and gardens and the garden itself was named Bagh-e Shah (Persian for “Garden of the King”), although it was much simpler and less decorated than later. In the 14th century, the Injuid dynasty gained control of the region after the fall of the Ilkhanate, and at least one of the leaders of this dynasty used the Eram Garden as his seat of power. It was during this period that it reached the peak of its splendor, as after the reign of the Timurids and Tamerlane their attention shifted to building new gardens in the region, with the result that the Eram garden was forgotten for several centuries.

Construction of the present garden, including the pavilion and gardens, began in the 18th century during the Qajar dynasty when various Qashqai tribal leaders used it as the seat of government for the region after Nadir Shah ordered the restoration of the urban gardens. Those who considered themselves the heirs of the ancient Ilkhanate continued this work throughout the 19th century and completed it towards the end of the 19th century.

The Dutch traveler Cornelis de Bruijn wrote a description of the gardens in the 18th century. Over the centuries, the structure has been altered, restored, and stylistically altered by various designers. The main pavilion, facing southeast along its longest axis, was designed by the local architect Haji Mohammad Hasan. The building had 32 rooms on two floors, decorated with tiles on which were inscribed the poems of the Persian poet Hafiz Shirazi. The pavilion was renovated during the Zand dynasty and again during the Qajar dynasty. The Pahlavi dynasty invested a lot of energy and money in restoring the garden to international recognition; indeed, the British ambassador to Iran, Sir Denis Wright, was invited in 1965 by Asadollah Alam, a close friend of Mohammad Reza Pahlavi and then Rector of Shiraz University, to a party in the Eram Garden given by Princess Alexandra of Kent. During the Pahlavi dynasty, the complex came under the responsibility of the then Pahlavi University, which used it as a law faculty until the 1980s.

Today it still belongs to Shiraz University and is open to visitors as a museum. On 27 June 2011, the Eram Garden and other representative gardens of Iran were inscribed on the World Heritage List under the generic title “The Persian Gardens”.

The present pavilion, erected on the same site as the previous pavilion after its demolition, has three floors, a two-pillar porch extending over two floors, rounded gabled roofs, and a large pond in front of the entrance. The interior consists of a large central hall, the Houz Khaneh (Bath House), flanked by two corridors separating it from the two wings occupied by rooms. The floor and walls of the hall are covered with painted tiles, the use of which extends to the facade, making polychromy an important element of the pavilion.

At the rear of the building, facing west, is the Andaruni, a building which served as a seraglio for those who occupied the complex at the time and which consists of five rooms: a square room in front of the gate, called Golam neshin (servants’ living room), and two on either side of the side corridors. During university use, it was the building that housed the Faculty of Law and the bath became the library.

The water needed for the garden came from a nearby spring, but with the development of projects in the city, it was supplied from two wells dug for this purpose. Canals carrying water run from the west along the sides of the two-axis paths after passing through the main hall of the pavilion. The Eram Garden is notable for its pine and cedar trees, the latter can reach up to 35 meters in height, as well as the roses that once had their own garden on the grounds. 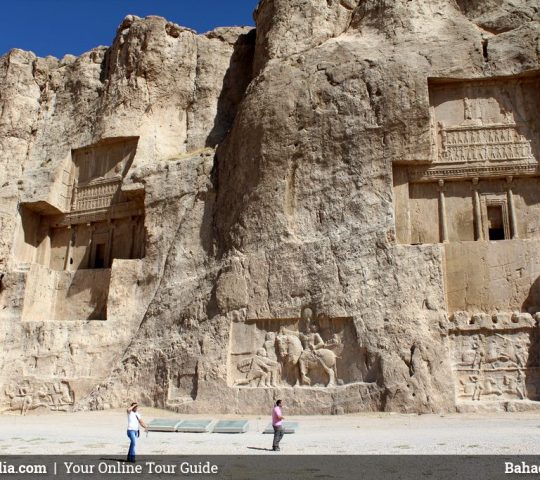 Naqsh-e Rostam is an archaeological site located about twelve kilometers northwest of Persepolis, in the… 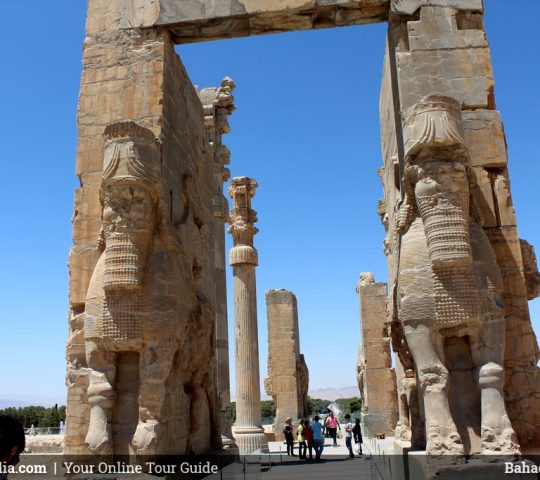 Persepolis was the capital of the Persian Empire during the Achaemenid era. It is located…